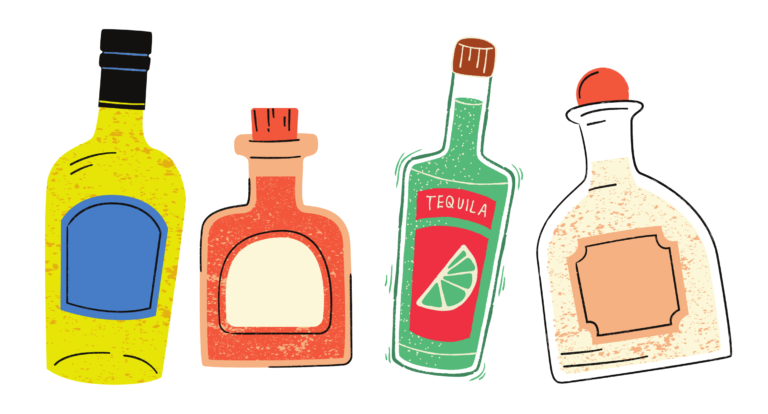 This guide is to help bartenders and servers better understand the spirits available at the bar of their restaurant. The more knowledgeable one is about the various types of liquor and how they are made, the better they will be able to create cocktails or recommending drinks to guests.

How is alcohol created?

Alcohol is created when yeast eats sugar and excretes ethanol.

Distillation is the application of intense heat to separate alcohol from water, creating alcohol vapor, which is then cooled to turn the vapors back into higher-alcohol liquid through condensation.

What does "ABV" mean?

ABV is an abbreviation for “alcohol by volume.”

What does "proof" mean?

Proof is a unit of measure of the content of alcohol in an alcoholic drink. In the United States, the “proof” is the ABV multiplied by 2.

Gin is a spirit that is distilled from grain that is flavored with botanicals.  Juniper is where is gets its primary flavor profile from, along with other flavors including coriander, lemon peel, fennel, anise, ginger root, orange peel, and angelica.

What are the different types of gin?

Vodka is an odorless, colorless type of liquor that is distilled from grain like rice or wheat and even sometimes potatoes or fruit. It is also generally tasteless unless it has been flavored.

Rum is a spirit made from fermenting and then distilling molasses, sugar cane juice or syrup.

What are the different types of rum?
What is rhum agricole?

Rhum agricole is made from sugar cane juice, not molasses. It is made in the French-speaking Caribbean islands.

Mezcal is a type of liquor made primarily in Oaxaca, Mexico from the agave plant. It has a smoky quality from the slow baking of the agave piña in clay ovens over hot rocks. Tequila is made from the blue agave plant.

So are tequila and mezcal the same thing or different?

The way that it works is: all tequilas are mezcal, but not all mezcal is tequila. 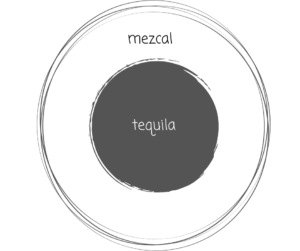 What are the different types of tequila?

Whiskey is a liquor that has been distilled from a fermented mash of grains. These grains are generally corn, wheat, malted barely, or rye. The mix of ingredients, aging process, and geographical location determines the type of whiskey, which includes bourbon, rye, and Scotch as well as Canadian, Irish, and Tennessee whiskeys.

What are the different types of whiskey?
Why does the "e" in "whiskey" go missing sometimes?

Brandy is a distilled spirit made from fermented fruit or fruit juice, oftentimes aged in barrels.

What types of fruit are used to make brandy?

Brandy is not limited to just one type of fruit juice. Cognac and Armagnac are two well known wine-based brandies from France. Another French brandy is Calvados, which is made from apples. Pisco is a wine-based brandy made in Peru and Chile.

Other brandies can be made from fruits like peaches, berries, apricots, and can include more than one type of fruit.

What do the different categories of cognac and armagnac mean?

These categories refer to how long the cognac or armagnac has been aged. They include:

A liqueur or cordial is sweet alcoholic beverage made from an infusion or flavoring ingredients and a spirit. They typically are lighter in alcoholic content than liquor.

Liqueurs and cordials can encompasses a wide range of characteristics from herbs to fruit to creams to spices and more. They are typically used in cocktails to enhance the flavor of the drink or can be enjoyed even on their own! While there are always new liqueurs and cordial flavors being developed as trends change, this section will include the various types that can be used in a classic cocktail or enjoyed as an apéritif (before dinner beverage) or a digestif (after dinner beverage).

An Italian herbal liqueur often consumed as an after dinner digestif.

An Italian bitter liqueur made of gentian, rhubarb, and cinchona. Bright orange in color.

Another Italian bitter liqueur infusion with herbs and fruit. Dark red in color. Similar to Aperol but not as sweet.

A French liqueur made from red and black raspberries.

A French herbal liqueur. There is a green version and a milder, sweeter yellow version.

A sweet liqueur made from black currants.

A violet, floral-flavored liqueur. Is also violet in color.

An Italian bitter liqueur made of plants and herbs, including artichokes.Can be enjoyed as both an apéritif and digestif.

A liqueur made from Scotch whisky, honey, and spices. Golden in color.

An herbal, bitter liqueur made of herbs and spices such as rhubarb, chamomile, cardamom, aloe, and saffron. Can be served as a digestif.

A sweet, Italian lemon liqueur. Often served as a digestif.

A coffee liqueur from Mexico made from rum, sugar, and coffee.

A liqueur obtained from the distillation of Marasca cherries.

Bourbon is a major growth industry in Kentucky, with its own Jim Beam being the top-selling bourbon in the world. Back in 2016 when Jim Beam was building new warehouses to store its barrels to meet this global demand, they were putting the squeeze on production workers to fill them. 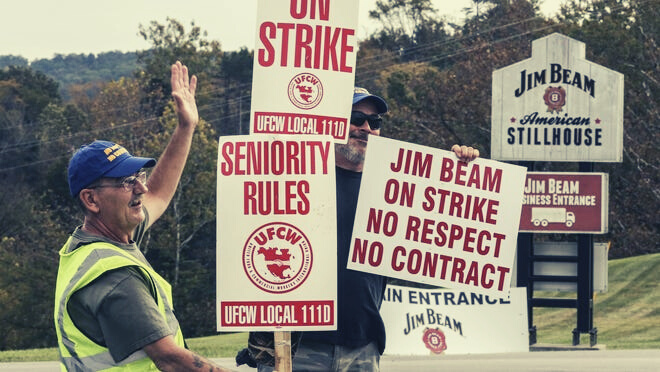 Workers were subjected to mandatory overtime with 70-80 hour workweeks and a two-tier pay system that had some workers doing the same job for less money. Just as frustrating, the company did  not want to hire more full-time workers, so there were even more workers doing these jobs for even less pay!

Jim Beam workers went on a weeklong strike. As a result, the company agreed to eliminate the two-tier pay scale, cap temps at 25 percent of the workforce, and hire at least 27 full-time workers.

You can learn more about the Jim Beam Strike here.