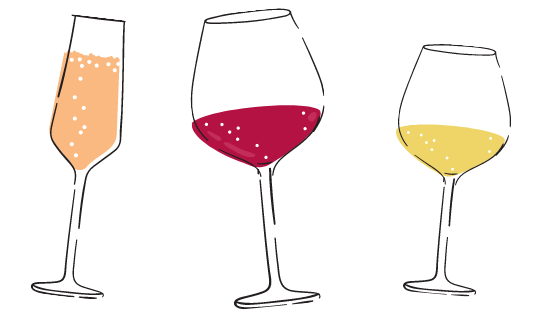 This guide is intended to provide some introductory information about winemaking, grape varietals, regions, and history to help bartenders and servers better understand what is on the menu.

Wine is an alcohol beverage that is fermented grape juice.

Where does wine get its color?

What does "vintage" mean?

The year that the grapes were harvested.

Do all wines taste better as they age?

No. Most wines are meant to be consumed young while and are perfectly fine to drink within  the year they were made. Others, such as full-bodied red wines heavier in tannins do transform the longer they age.

The skins, pits, and stems of the grapes used to make the wine act as natural preservatives, which are known as tannins. These especially allow a red wine to age with grace. The best way to recognize the tannins is the mouth sensation it creates and can be enhanced when paired with certain foods.

Terroir is the “somewhereness” of where the grape is grown. This includes but is not limited to the soil and geography of the area that the grapes are grown; how much sunlight or rainfall the vineyard receives; the overall weather and climate; among others.

The most common red wines that you will likely come across on your menu will likely be from the following grapes:

Grows best in the Bordeaux region of France, Napa, California and Chile. Tends to have blackberry, blackcurrant and violet flavors. Generally full-bodied and a higher tannic structure.

Grows best in the Burgundy and Champagne regions of France, California and Oregon. Tends to have raspberry, red cherry, and earthy flavors. Acidic for a red wine. Generally very light-bodied and little to no tannic structure.

Grows best in Tuscany, Italy. Tends to have black cherry and blackberry flavor with cedar and vanilla aromas. A bit of spice. Generally a medium-bodied wine. The major grape used to make Chianti.

Grows best in the Bordeaux region of France and Napa, California. Tends to have blackberry and plum flavors. Can smelly a little toasty at times. A medium bodied wine with a velvety texture, not many tannins.

Grows best in the Rioja region of Spain. Tends to have a fruitier taste like cherries but the way it is produced can also exudes tobacco flavors and aromas. Generally a medium-bodied wine.

Grows best in the Bordeaux region of France, Napa, California and Chile. Tends to have blackberry, black current and violet flavors. Generally full-bodied and a higher tannic structure.

Grows best in California. Tends to have cherry and ripe berry flavors, sometimes spicy. Tends to be medium-bodied.

Grows best in the Piedmont region of Italy. Has flavors like plum and raspberries, natural tasting even. Wines are full-bodied and have a higher tannic structure.

Grows best in the Burgundy region of France. Has very tart flavors like raspberries and cranberries. A very light-bodied wine with virtually no tannins. Best drunk when young.
What does light-bodied vs full-bodied mean?

Lighter-bodied wines tend to taste and feel leaner and more delicate than a fuller-bodied wine, which will come off as heavy, bold, and powerful. Generally a full-bodied wine has a higher alcohol content.

As mentioned in the Intro to Wine section above, tannins are the natural preservatives that are found in wine. A wine with higher tannins has a mouth sensation, often similar to mouth feel from drinking a tea that was steeped for a long time. A wine with lower tannins feels smoother.

The most common white wines that you will likely come across on your menu will likely be from the following grapes:

Grows best in the Alsace region of France, Germany, and Washington state. Tends to have citrusy and tropical fruit flavors. Known for its sweetness.

Grows best in the Burgundy and Champagne regions of France, California and Australia. Tends to softer fruit flavors like apple, melon, and pear. Some are known for their buttery, oaky qualities.

Grows best in the Bordeaux and Loire regions of France, California and New Zealand. Tends to be citrusy and grassy green flavors.

Grows best in the Loire region of France and California. Tends to have citrusy and tropical fruit flavors. Versatile but typically dry.

Grows best in the Alsace region of France and in Germany. Can be sweet but with a bit of spice. Exhibits fruits like apricot. Texturally rich.

Grows best in Italy, California, and Oregon. Tends to have citrusy and tropical fruit flavors. Typically a dryer, lighter wine.
What makes a wine sweet?

Sweetness in wine happens when there is any residual sugar left in the wine itself after the fermentation process. Letting grapes dry like raisins before producing them into wine can result in sweeter wines as well.

Rosé is a type of wine that can come in a variety of forms and from a variety of grapes. Typically rosé wines are made by using the grape skins to color the wine but not as much as if it were a red wine. Rosé can be both sparkling and still wines. Dry or sweet. Even the color of the wine can range from a light almost clear liquid to a bright red, even orange!

The most common sparkling wines that you will likely come across on your menu will likely be the following types:

Sparkling wine made in the Champagne region of France and must be made using Méthode Champonoise. Made from Chardonnay, Pinot Meunier, and or Pinot Noir grapes.

Although there are different methods for creating sparkling wine (Champagne specifically uses the Méthode Champonoise), typically after the first fermentation process occurs, more sugar and yeast is added to the wine and a second fermentation happens. This part of the process is where the bubbles come from.

Knowing where a certain wine comes from can give your a better idea about how it will taste. Below is an interactive map that provides information about what regions are best known for the wines they produce.

US
The Delano Grape Strike and Boycott

Grapes may just grow from the vine, but it takes a lot of thought and labor to make wine. After years of poor pay and working conditions, Filipino American grape workers, went on strike against  grape growers in Delano, California in 1965. 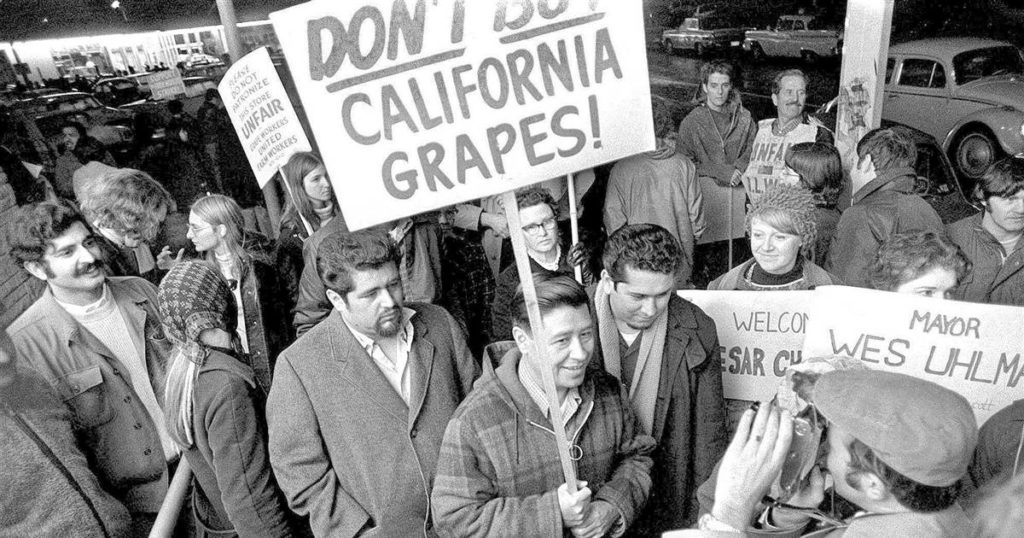 The Filipinos workers were joined by Cesar Chavez and the Mexican National Farmworkers Association. Historically, growers relied on the division of workers to stifle any strike or union activity; however, Chavez believed that solidarity could lead to a successful walkout. Later these two groups would become the United Farm Workers labor union.

As a result of the strike and boycott, the grape growers signed their first union contracts, granting workers better pay, benefits, and protections.

You can learn more about the Delano Grape Strike here.